The idea to artificially create a real-time picture as seen from the cockpit, containing the essential information about the environment, has been around since the Fifties of the previous century! Probably the first term used to describe it was ‘Contact Analog’ display. Synthetic Vision (SV) is a term that was coined in the Nineties. Although at first it was used to refer to systems that present sensor-based images or both computer-generated and sensor-based images, nowadays the term refers to a computer-generated, spatially integrated depiction of the environment, typically for aircraft navigation. Unaware of the history of SV, several parties have tried to patent the concept 😊 at a later time.

ISD has been developing synthetic vision displays since 1994. To satisfy Size, Weight and Power (SWaP) constraints typical for airborne hardware, dedicated graphics chipsets were used instead of graphics workstations. Initial prototypes used a TMS34020 GSP for the symbology and Hitachi HiSpeed Shading Processors for the terrain rendering. The four pictures below show the guidance symbology overlaying the rendering of the terrain during a simulated approach on the 1994 setup.

Since that first implementation in 1994, DELPHINS SVS has been flight-tested in the NASA 757 ARIES, a Gulfstream V, the FAA Boeing 727, the Boeing 737-900 Technology Demonstrator, the Douglas DC-3 and Beech King-Air of the Avionics Engineering Center of Ohio University. In 2021, DELPHINS SVS is used in various research simulators for display research projects, e.g. the X-59 simulator at NASA Armstrong and the RFD at NASA Langley. Other facilities using DELPHINS SVS include the UAV research laboratory of the Netherlands Defence Academy and the Research Simulator at TU Berlin. Some of the more interesting highlights are summarized on this page. Enjoy! 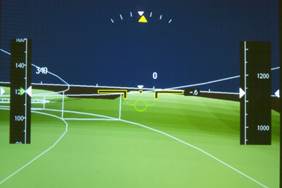 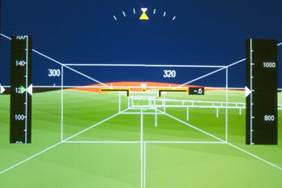 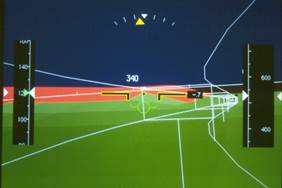 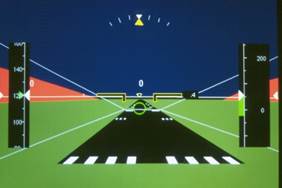 In this early SVS, color coding was based on terrain elevation. To increase pilot awareness of terrain that was above ownship altitude, this was colored red. A later version used ownship velocity vector to limit the amount of terrain that is colored red to the area that is of direct relevance.

The design of the guidance symbology is described in: 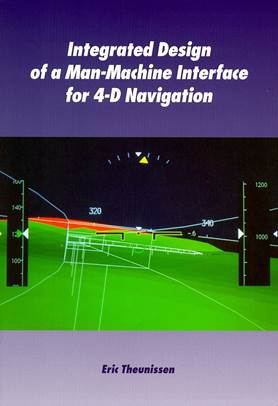 The next generation (1997) used the 3Dfx graphics chipset, adding hardware texture mapping. This was the basis for the SVS prototypes used by the Rockwell Collins team.

On September 13 (2000), tests in the NASA Boeing 757 (the NASA ARIES) with the Rockwell Collins team DELPHINS SVS were completed and a first checkout flight was performed. Unfortunately, we couldn’t fly the next day since a bleed-air valve of the left engine was stuck and by the time it was resolved Langley AFB was operating too many F15’s. 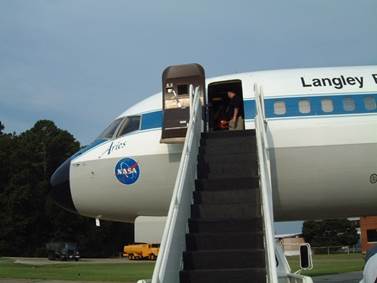 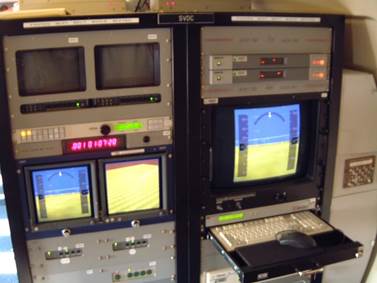 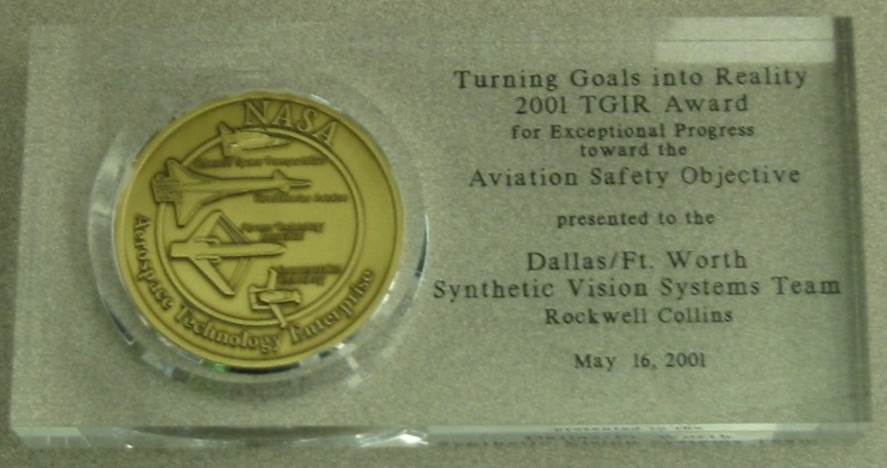 The first series of flights of the NASA ARIES in a terrain challenged environment took place in 2001 at Eagle-Vail. Here we flew continuous descending curved approaches to Runway 07 with a dynamically optimized approach path. 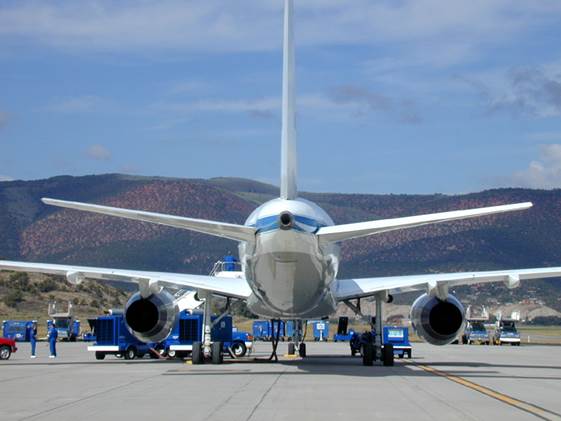 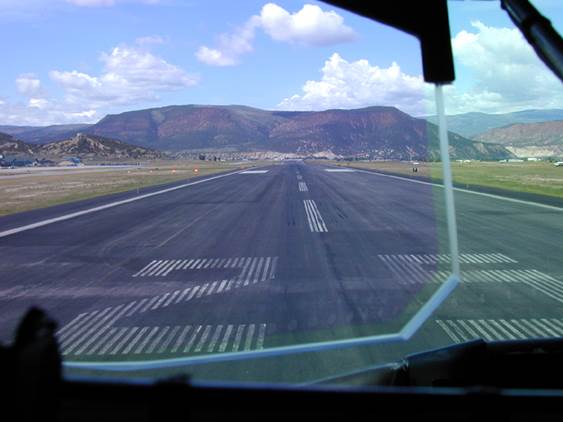 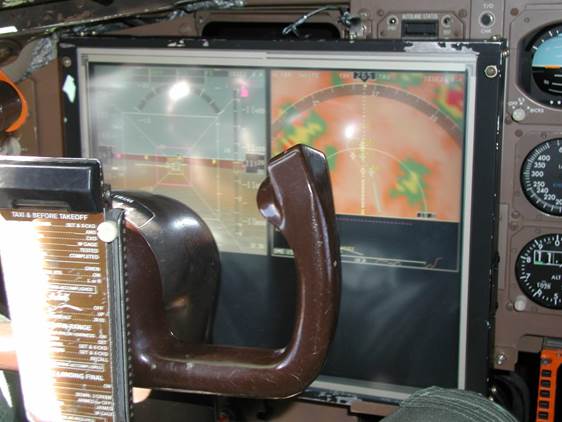 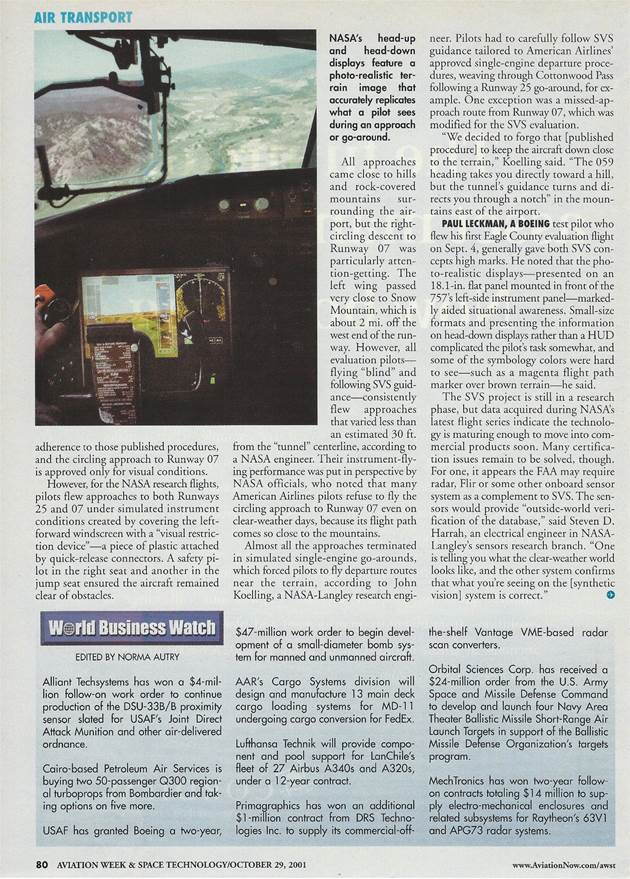 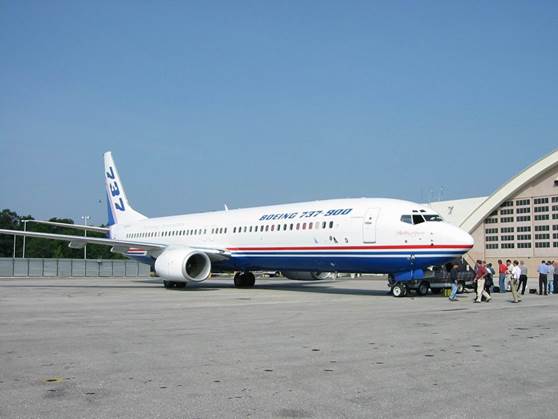 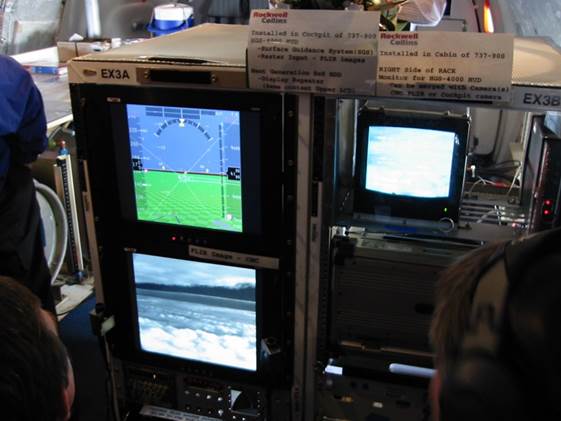 Besides the SVS, also the exo-centric Taxi-Guidance Display (below) was demonstrated. During approaches into Reagan National Airport, the depiction of Special Use Airspace (i.e. P56A) made the “invisible visible”. 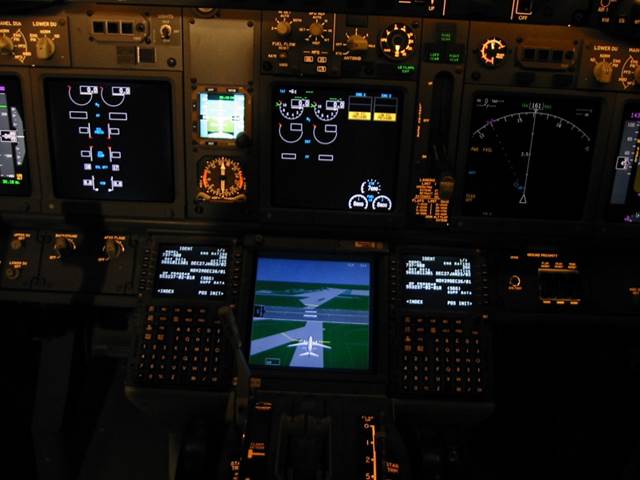 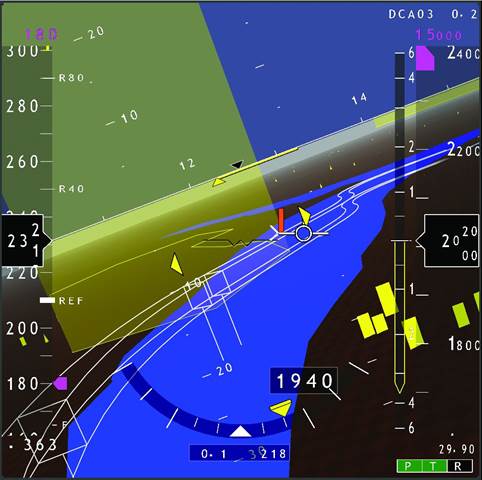 Also, since 2017 the capability to display the predicted Sonic-Boom footprint is integrated in the Mach version of the DELPHINS SVS

In 2004, flight test of an SVS/EVS system and a surface guidance display was performed in the NASA Gulfstream V as part of the GVSITE team.

In 2005, the GVSITE team received the  NASA Turning Goals into Reality Award. 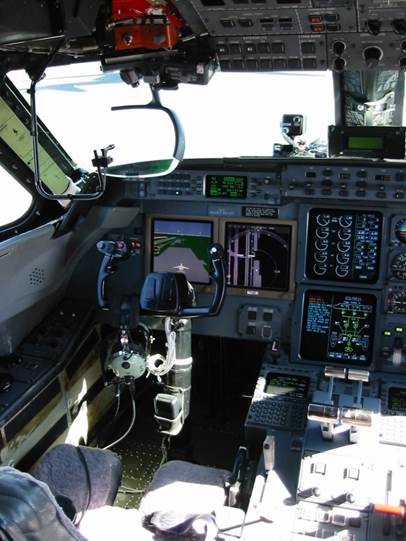 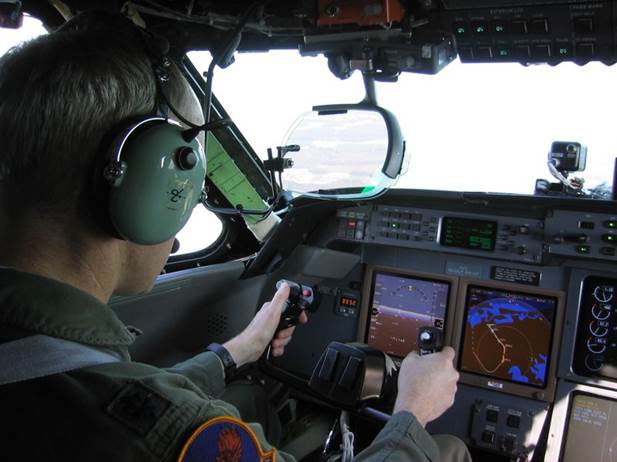 Also, a terrain following guidance capability was added to the computation of the guidance tunnel. This was flown on board the FAA B727 in 2005, mimicking a Talon II mission using the Black Diamond training routes in New Mexico.

Special functions comprised 4-D guidance by means of both target speed cues on the SVS PFD and indication of predicted location at the required time-over-target on the ND.

The guidance function was used to perform a simulated point in space approach down to 50 feet for a simulated high speed low altitude drop of cargo.

The vertical profile of the terrain following path could be changed in real-time using a control panel to specify maximum and minimum climb angles and normal acceleration.

Off-path TF guidance was provided using a forward projected path on the SVS display that locked at 500 ft above the terrain.

Color coding was used to indicate that ownship was getting too close to the terrain floor. 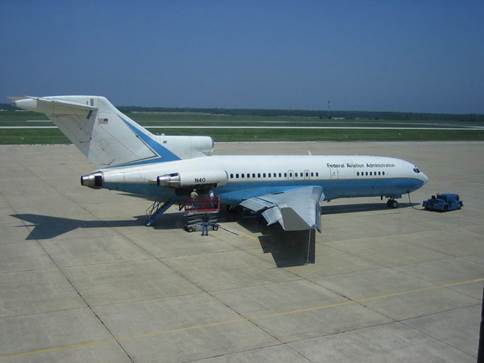 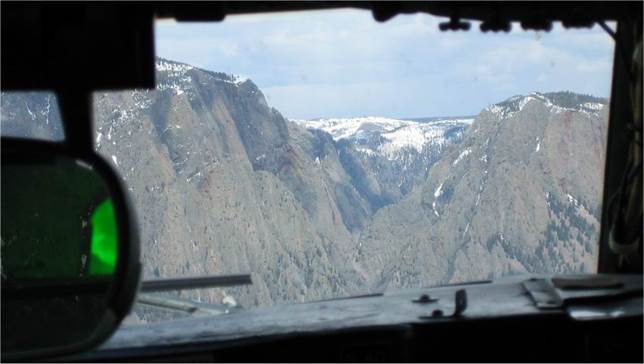 A conformally integrated view from a forward looking IR sensor was provided to support detection of terrain database discrepancies. 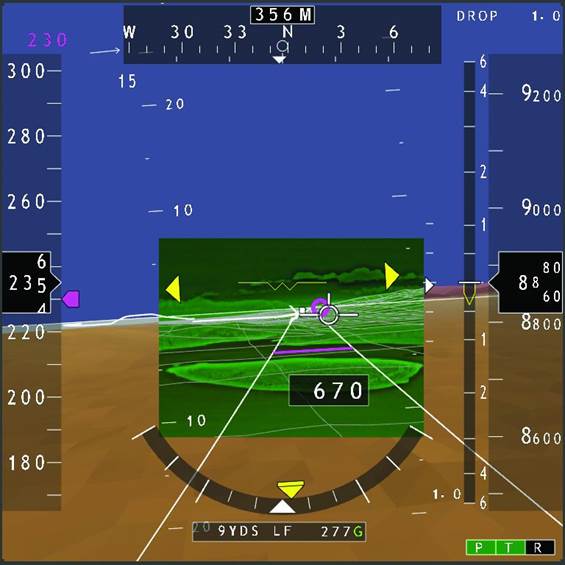 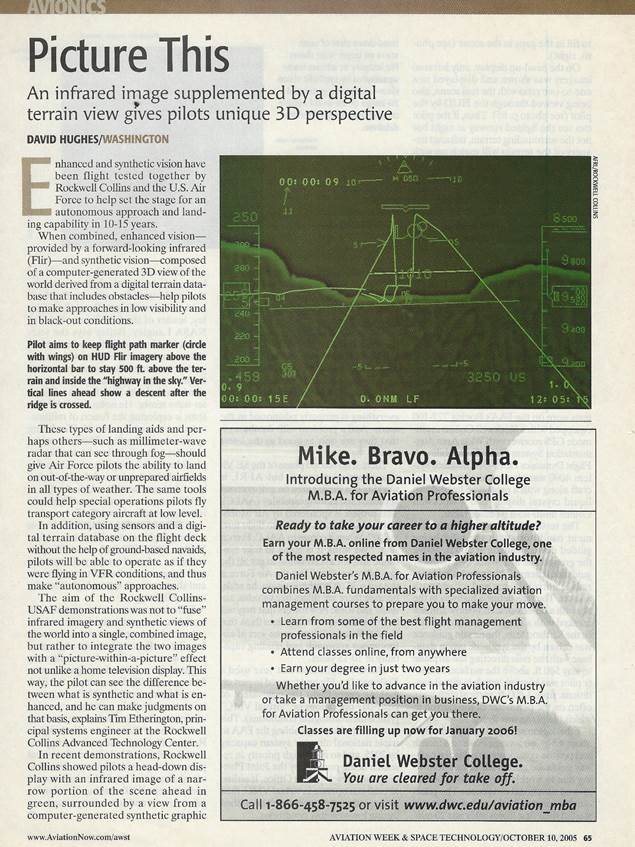 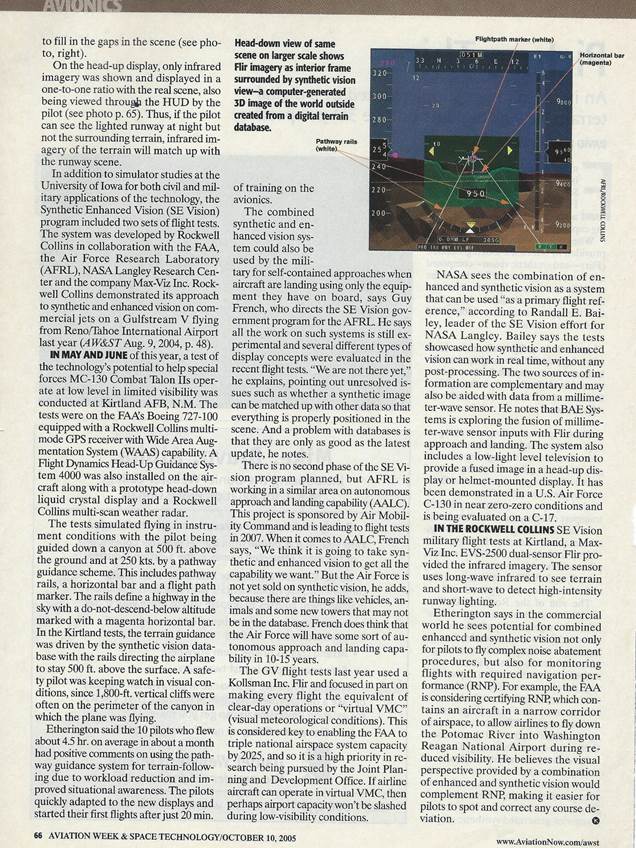 The Avionics Engineering Centre of Ohio University (Athens, OU) used DELPHINS in both their DC-3 and King-Air research aircraft during various flight-tests. One of the projects concerned flight test evaluation and data collection of terrain database integrity monitoring methods for synthetic vision systems using radar altimeter and weather radar. Below are two pictures taken in 2002 during testing in Alaska on the way to Juneau. Note the red terrain to the left and right of ownship path on the navigation display. 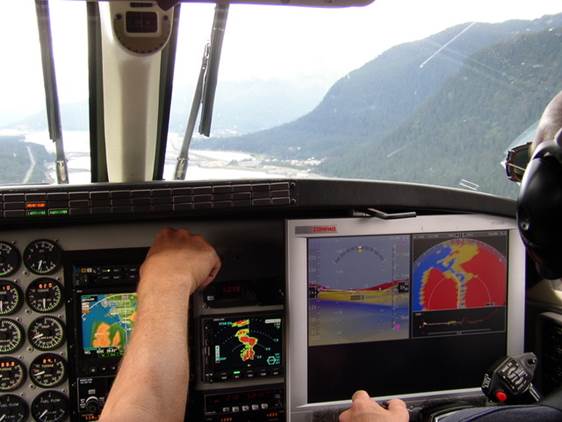 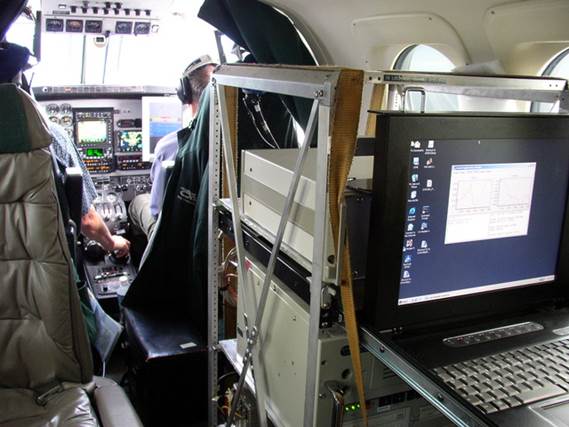 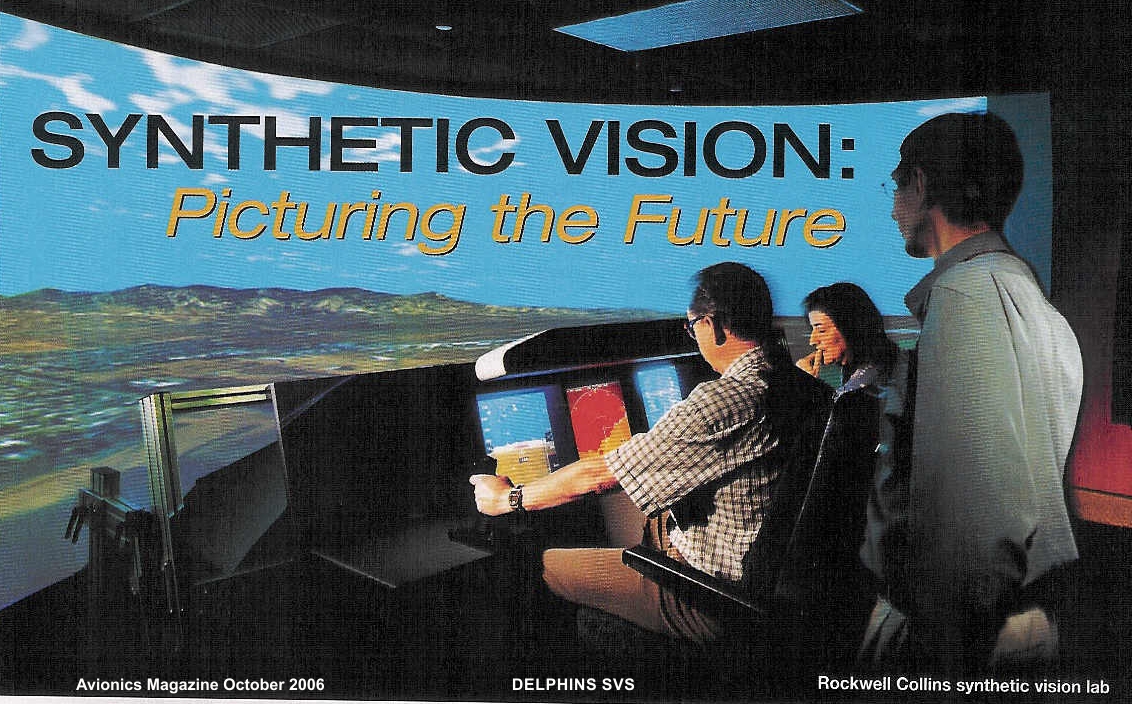 For the 2004 GVSITE project, initial testing was done using the DELPHINS SVS in the OPL research simulator (below). 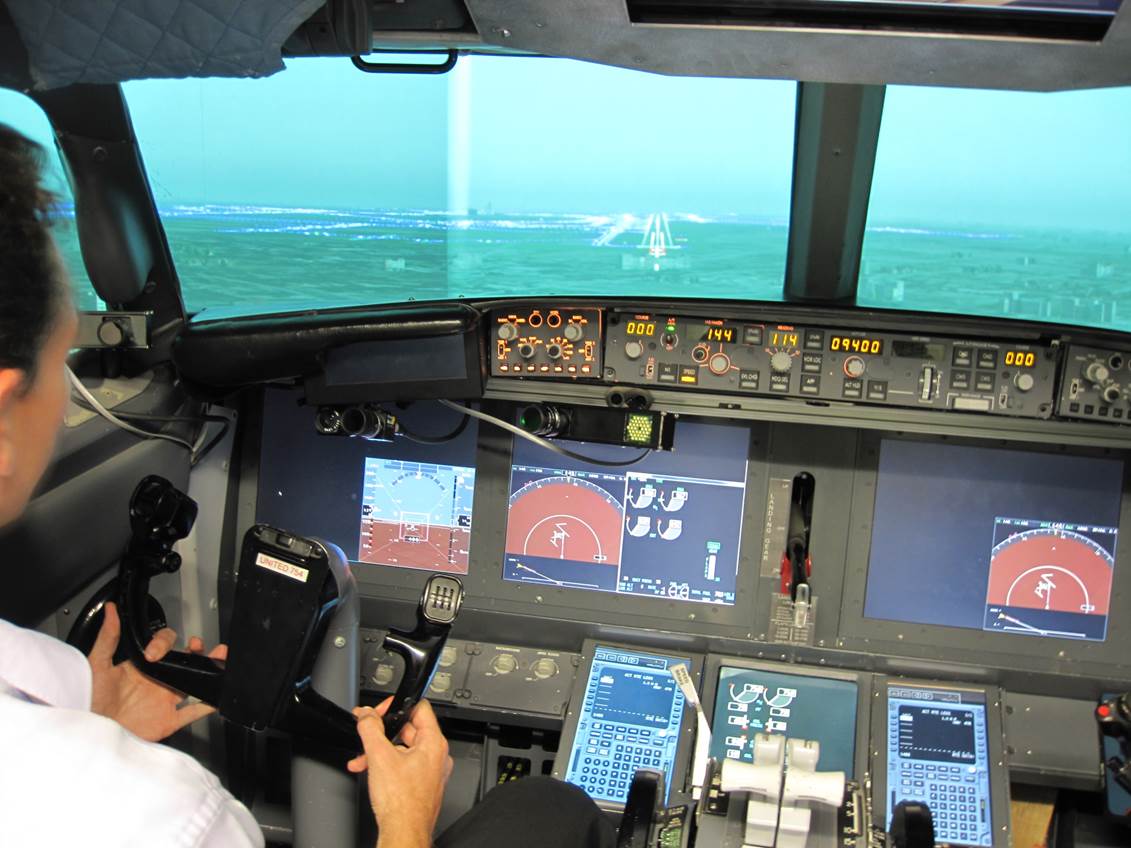 In the late Nineties, Rockwell Collins used a screen-capture of the prototype SVS PFD on the back-cover of Flight and Aviation Week & Space Technology.

The picture on the right is from a DELPHINS simulation using a 4 by 3 aspect ratio format.

The quote ‘five seconds ahead of its time’ actually referred to the look-ahead time for the position predictor that was used to provide guidance information. Although I liked it, I am afraid that it might have been misused in the context of being ‘only five seconds ahead’ whereas it would be better to be ‘lightyears ahead’.

Personally, I always liked the mission statement that my friend MudH from OU came up with after another late night work to prepare for the flight-test the next day: ‘We invent tomorrow’s technology the evening before’

If you made it until here and wonder how to make your own SVS, this tutorial may be of help